Flotilla: Our video guide to stern-to mooring with Yachting Monthly 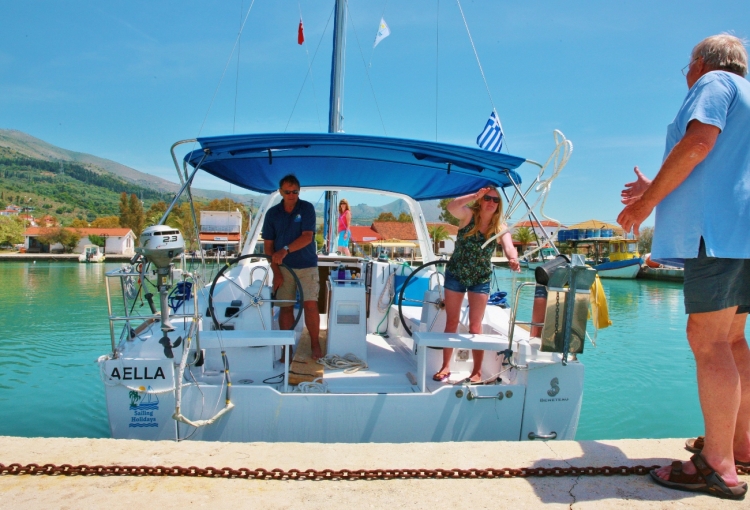 In this guide we take you through every aspect of stern to mooring; from the all important preparation to pouring yourself a well-deserved beer. In May 2015 Theo Stocker from Yachting Monthly went out sailing with Barrie and his crew. Whilst out there they covered all sorts of Mediterranean sailing techniques which, as a sailor in the UK, you don’t necessarily come across. Theo noted one persistently daunting prospect, of chartering in the Med, was ‘stern to mooring’.

What is stern to mooring?

Stern to mooring is essentially reversing into a ‘berth’ or space, on a quay, in a harbour. A little like bay parking your car at your local supermarket although, as many who have tried with attest, slightly more complicated! Unlike your local Waitrose car park, Mediterranean harbours generally have a few challenges up their sleeve – cross winds, other boats and limited manoeuvring space to name a few!

Stern to mooring advice for all conditions

Theo and Barrie set out to create this video to show, plain and simple, how stern to mooring needn’t be a scary prospect. We know hardy sailors will argue that our video was filmed in a quiet harbour, on a fortuitously calm day, making it look very simple.

We agree it could be far more amusing if filmed in Fiskardo, in August, with the Meltemi blowing. We also considered some of the key points may be lost in the pandemonium of bikini clad (female) and shouting (male) Italians. So, instead we opted for somewhere with slightly fewer distractions – a small fishing village, close to the Albanian border, in May. This said the same principles, of being prepared and controlling speed, will stand you in good stead no matter what the conditions...

Our 10 Step Guide to stern to mooring

1. Be prepared! By this we mean prepare your boat before you enter the harbour. Make sure you have your mooring lines (at the stern) ready to throw, your fenders are out doing their job and the anchor is free of its perch dangling just above the water ready to be dropped!

2. Once you are in the harbour, you want to give yourself as much of a run up as possible, so leave plenty of space.

3. When you think you have enough space, pop the boat into neutral until it comes to a stop. Once it has stopped you can put it in astern (reverse).

4. Once it starts moving backwards (and not before) head around to the other side of the wheel to face the direction of travel (as per Theo's excellent photographs below). This means you can control the speed and see where you are going – rather useful! Especially in a busy harbour.

5. Whilst moving backwards and when you are about 3 boat lengths from the quay let your crew member know to drop the anchor.

6. Control your speed whilst heading towards the quay – nice and slow and easy. Keep an eye on where you’re going and steer to counter any cross winds etc.

7. The majority of the time – on a flotilla – someone will be waiting on the quay to take your line (as Theo's photograph above shows). At which point it is time to throw it to them! You can pass it, if this is a possibility, but it might mean you are a little close to the quay. They will either tie a bowline on the quay, or loop it through and hand it back to you, at which point you can secure it with an OXO on the cleat.

9. Once the ropes are secure it’s time to pull up on the anchor to keep the boat off the quay.

10. Turn the engine off and pour yourself a well-deserved cold beer... (And don’t forget to offer your lead crew or any local helpers one too!)

Put it to our team! Everyone who works in our office, used to work out on the water, so we can have a good go at answering any potential questions you may wish to throw at us. Give us a call on 020 8459 8787 or drop us an email on This email address is being protected from spambots. You need JavaScript enabled to view it..

Alternatively you can read more about the Expert's Guide to Stern To Mooring with Yachting Monthly here.