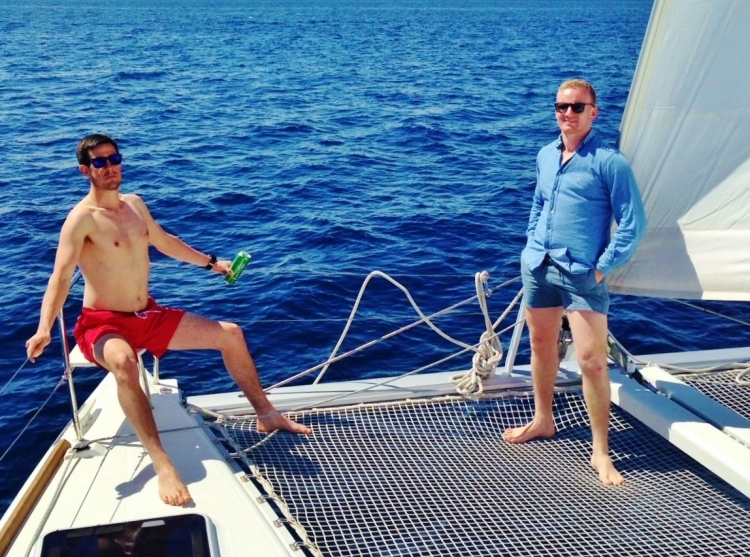 In April 2017 Sam headed out to meet our local suppliers in Athens and he even managed to squeeze in some sailing along the way! Read on to find out more about what Sam and his friends got up to in a mere three day break sailing from Athens. You might be surprised as to what you can achieve on a short but sweet escape in the sunshine. It's definitely made everyone in the London office consider a short sailing break this spring! What better way to escape the (seemingly never ending) wait for British summer?

Cold beers and warm welcomes awaited as we set sail from Athens on our three day adventure. Sunday saw us casting off from Alimos Marina - just a short journey from the city centre – the Aegean Sea our oyster. The boat was brilliant – a Lagoon 38 – for four blokes! Like a giant playground for grown ups...it was far more space than we could have hoped for.

We set off from Alimos Marina, at the leisurely time of 2pm, with a 33 mile journey ahead. With the South-Easterly Sirocco wind (common at this time of year when low pressure systems in the Mediterranean force warm wind up from the Sahara) on the beam we were cruising at 8 knots before long. This meant we arrived in Poros at around 6pm. In time to watch the famous sunset over the sleeping lady.

Poros is one of the busiest and most popular ports in the Saronic Islands. It is a must for anyone sailing from Athens. The beauty of sailing at this time of year was that we were (quite literally) the only boat on the quay! No bad thing when you are mooring a catamaran for the first time. We had an absolutely delicious dinner on a local recommendation. It being April, the tavernas weren’t quite ready for visitors and so once our orders were in, the waiter nipped off to grab the ingredients. Doesn’t get fresher than that!

After leaving Poros we had a leisurely breakfast in Russian Bay, followed by a cracking sail over to Agistri, where we stopped for a swim on the south east corner opposite Δορούσα (Dorousa) Island. The Sirocco wind was blowing once more, and today it was behind us, making for a brilliantly smooth 18 mile sail. This is a cracking spot to stop if you ever visit this part of the world. As for a swim stop in April...that is not for the faint-hearted! Refreshing would be the polite way to put it. After a lazy lunch we motored over to Aegina Island where the town quay was invitingly empty.

For dinner in Aegina, we opted for a fantastic fish taverna, nestled in the backstreets. Its authenticity as a marine cuisine specialist was endorsed by its proximity to the town’s waterside fish market. Not being the biggest fish fan I opted for Greek cheese cooked four ways. How... you ask? A Greek salad, spicy feta dip, feta stuffed peppers and last but not least deliciously fattening Saganaki (deep fried cheese for those not in the know).

Being keen sailors (despite the crew being somewhat light on experience), we were sceptical about how much we’d enjoy sailing a catamaran, wholeheartedly designed with cruising in mind. But we must admit... we may be converted. The space on offer was fantastic, combined with a comfortable double cabin each, it was tricky not to enjoy the indulgence! The on deck living space also made those leisurely lunchtime beers at anchor even more enjoyable. The trampolines between the hulls at the front of the yacht meant we had unrivalled views of the dolphins playing on the bow. They also meant that we came back with solid British sun 'tans' after just three days in April! Quite the accomplishment!

Sailing from Athens in April

This is earlier in the season than any of us had ever sailed in Greece and it was brilliant! There were no crowds to be beaten, no rush to secure sought after space on the quay, and last but not least none of the unbearably hot temperatures that the summer season brings. Instead we were greeted by spring flowers, warm breezes and incredibly enthusiastic locals, chuffed to see us after a long winter.

Fancy a short break this spring?