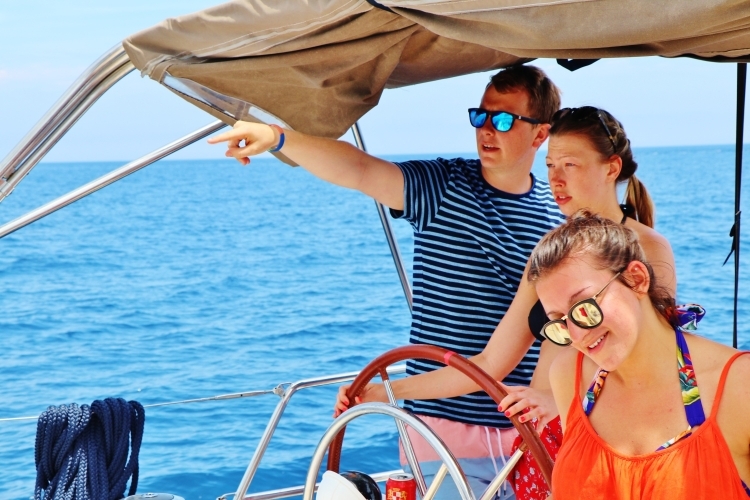 A week sailing in Sardinia and Corsica

At the end of May Sam and nine friends went to explore La Maddalena Islands off the coast of Sardinia. They also managed to fit in a a jaunt over to the French island of Corsica. They were a relatively novice crew but it’s safe to say they have all come round to Sam's way of thinking!

With the crew split over two different flights, the early arrivals could get the boat ready before the rest of the group arrived later in the day. The Marina in Portisco is purpose built with four restaurants and a great little supermarket. After beating the German crew next to us to the cheapest beers (Faux Peroni at €0.75 a can!), we selected a range of local sparkling wines, and got down to some sampling. The check-in by the charter company was fantastic and very thorough. They also ran through a ‘Flotilla’ style area briefing on the Sunday morning which involved wall charts, pilot books and all the local knowledge we could absorb. 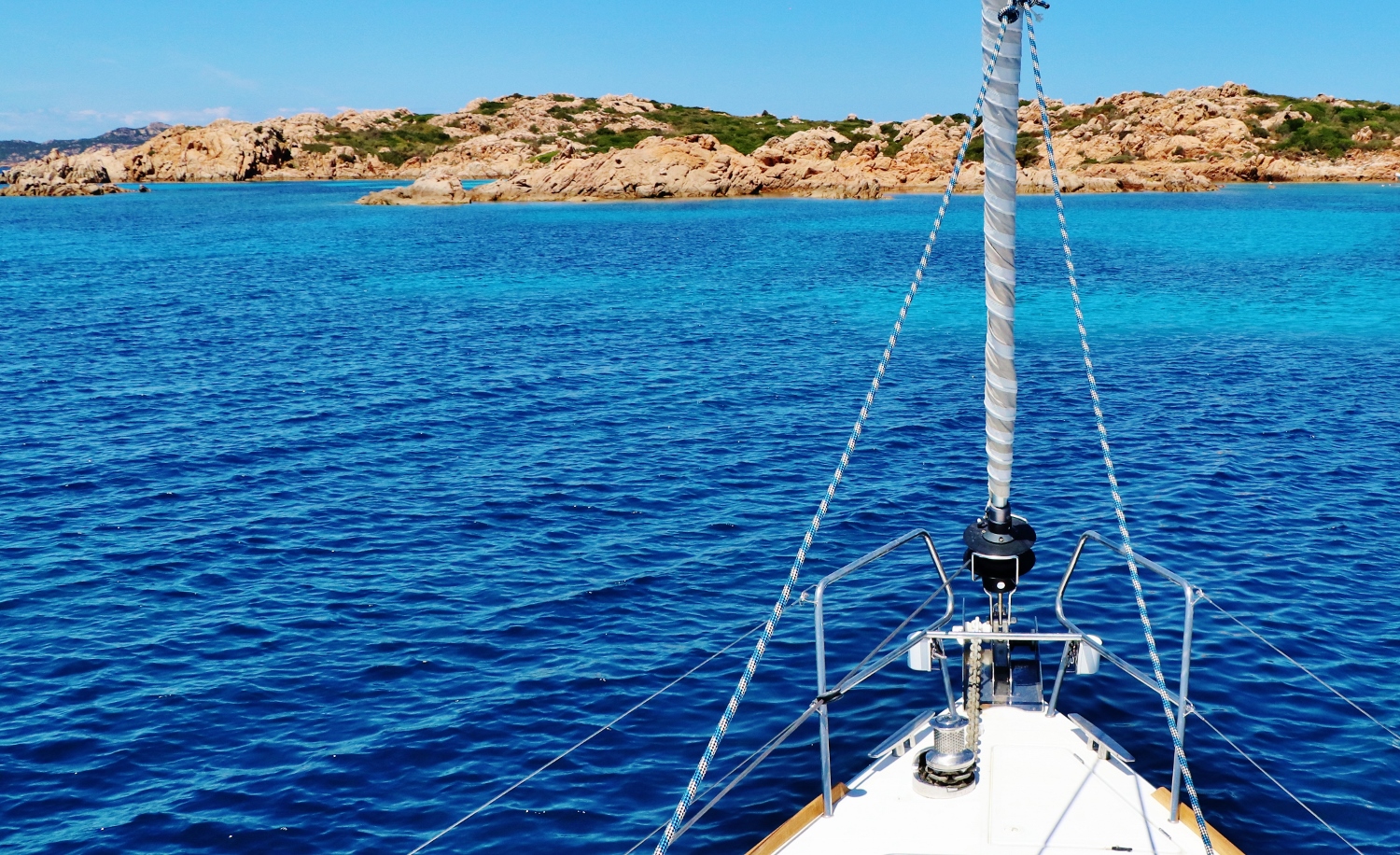 With a crew new to sailing, the first day was set to be a day of hands on training! After all the excitement of the morning a relaxing lunch stop was just what was needed. We managed to find a secluded bay with some amazingly clear water. Spiaggia di Mortorio is a small beach a short hop from Portisco, a great bay for a swim and a bite to eat. After subjecting our delicate British skin to a gentle roasting we pulled up the anchor and headed to Cannigionne. There is one main marina but each pier is operated by a different cooperative – strange set up but the prices are the same and the town has a “real life” feel to it. This is a fishing town and there are some great restaurants and bars. We had a lovely meal at L’Ostrica on the road up from the harbour. There is also a great bakery further up the road! 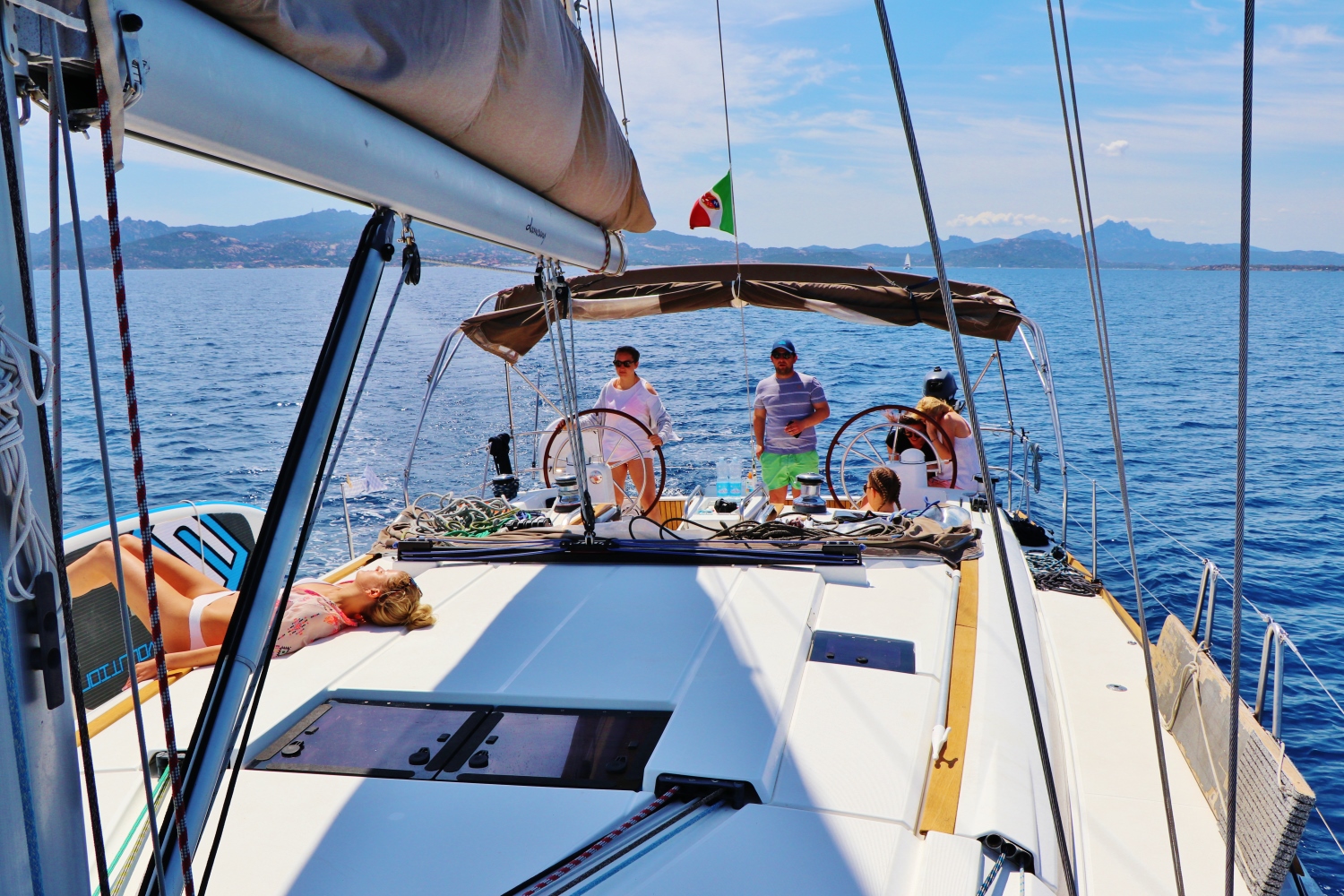 After a slow breakfast, we had the wind on the nose the whole way to Isola Budelli. The wind gets funnelled through the islands and so it does sit on your nose the whole way if it is blowing a NW. Isola Budelli is a gorgeous natural anchorage in the right conditions but you do need to buy a pass to drop an anchor overnight. Unfortunately, the pink sand beach and beautiful bay at Spiaggia Rosa is now out of bounds even to people walking on the beach – it does look beautiful from a distance though. That afternoon a lovely strong northerly blew and we had a great sail cruising at 8 knots over to Santa Teresa. Following a short passage down a creek to the Marina, we enjoyed one of the best pizzas of the trip in the beautiful Piazza. While grabbing a late-night Ice Cream we all agreed we needed some true French patisserie for breakfast and so we agreed that a morning sail to France was in order. 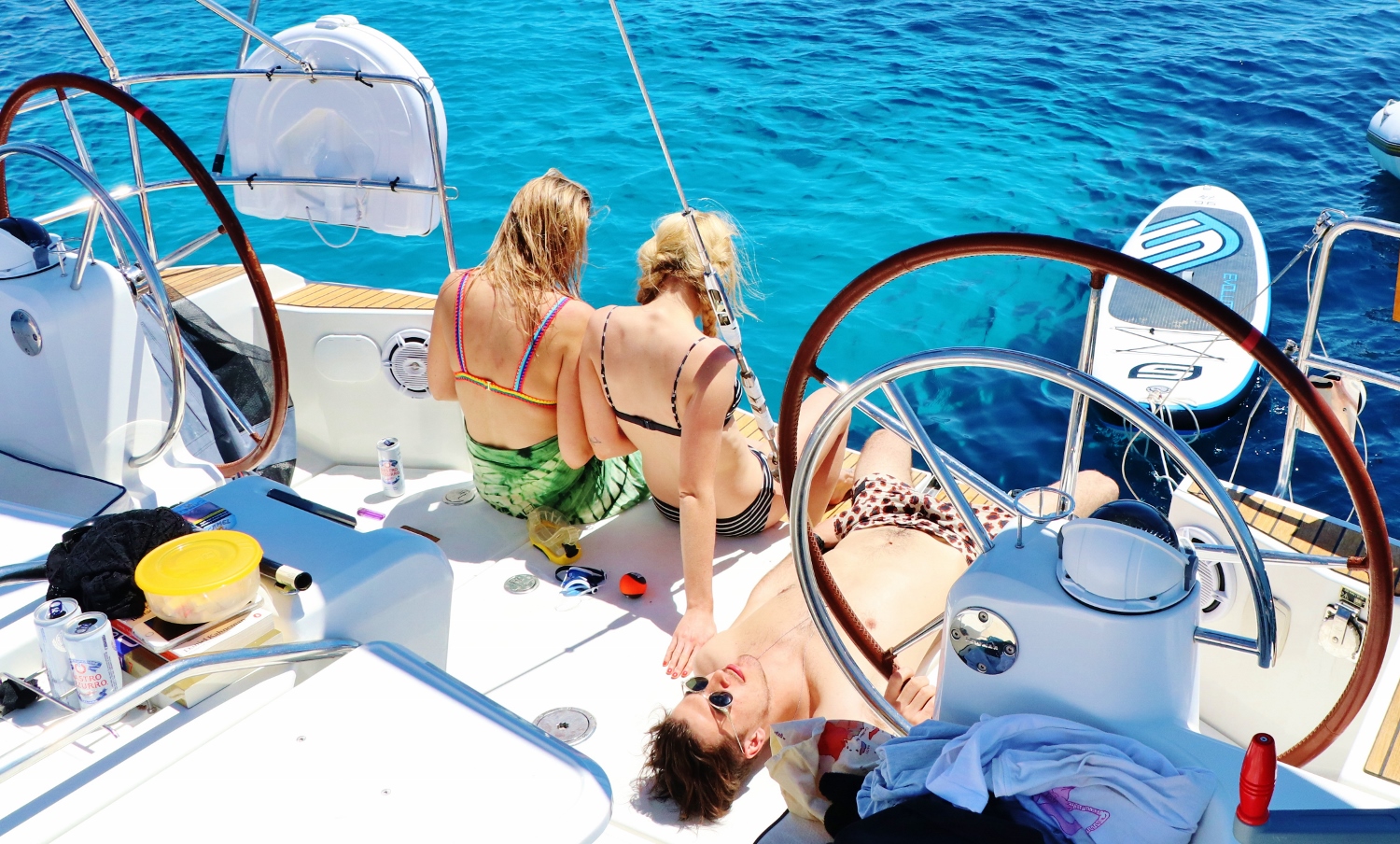 With the crew up and about slightly earlier than usual, we made the short passage across the Straights of Bonifacio. As we motored right up to the dramatic cliffs and ruins surrounding Bonifacio... we were brought straight back to the modern day, as our phones buzzed with the text, to inform us we were in a new country. Corsica is a French island and Bonifacio, on its south-eastern tip, is without a doubt one of the most beautiful places I have ever been. The buildings and castle merge into the huge cliffs and the entrance into the marina is extremely impressive. 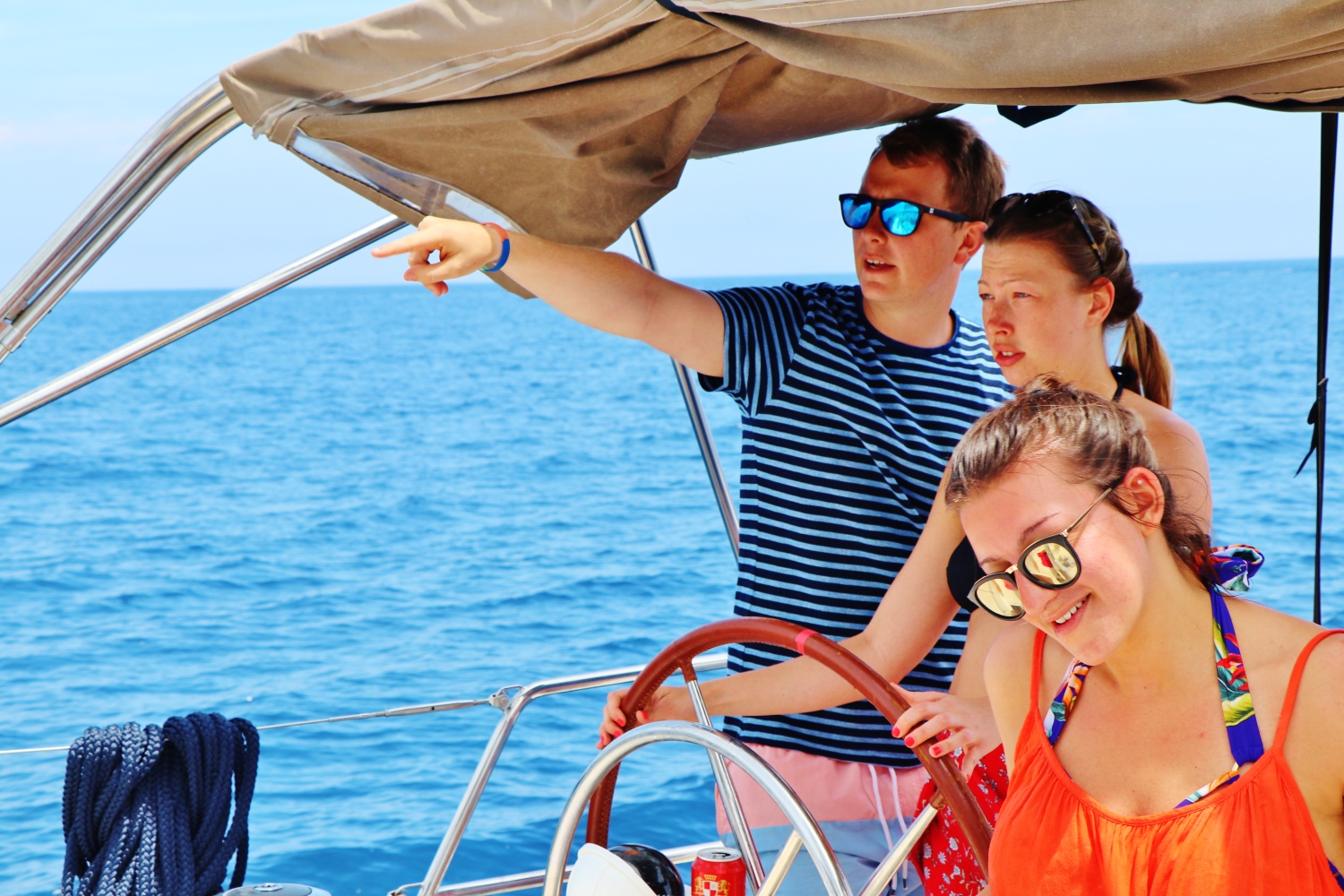 The marina is lined with smart restaurants and bars, a winding stair case leads you up into the warren of tiny passages that is the Old Town. We had a great brunch (complete with French Croissants) at a café on the cliffs looking out to the straights. The crew divided; the girls shopping, the boys looking for an adventure, we stumbled across an arrow pointing into a basement, simply marked "Limoncello". An hour long tasting session later, we reappeared with not just a bottle, but also an insight into the art of (probably illegal) home distilling! We concluded that a manly dinghy trip to do some fishing was an excellent idea. Empty handed, we returned for a glamorous evening at L’Emeraude tapas restaurant. A great evening followed by silly bar games led to us become local marina celebrities. 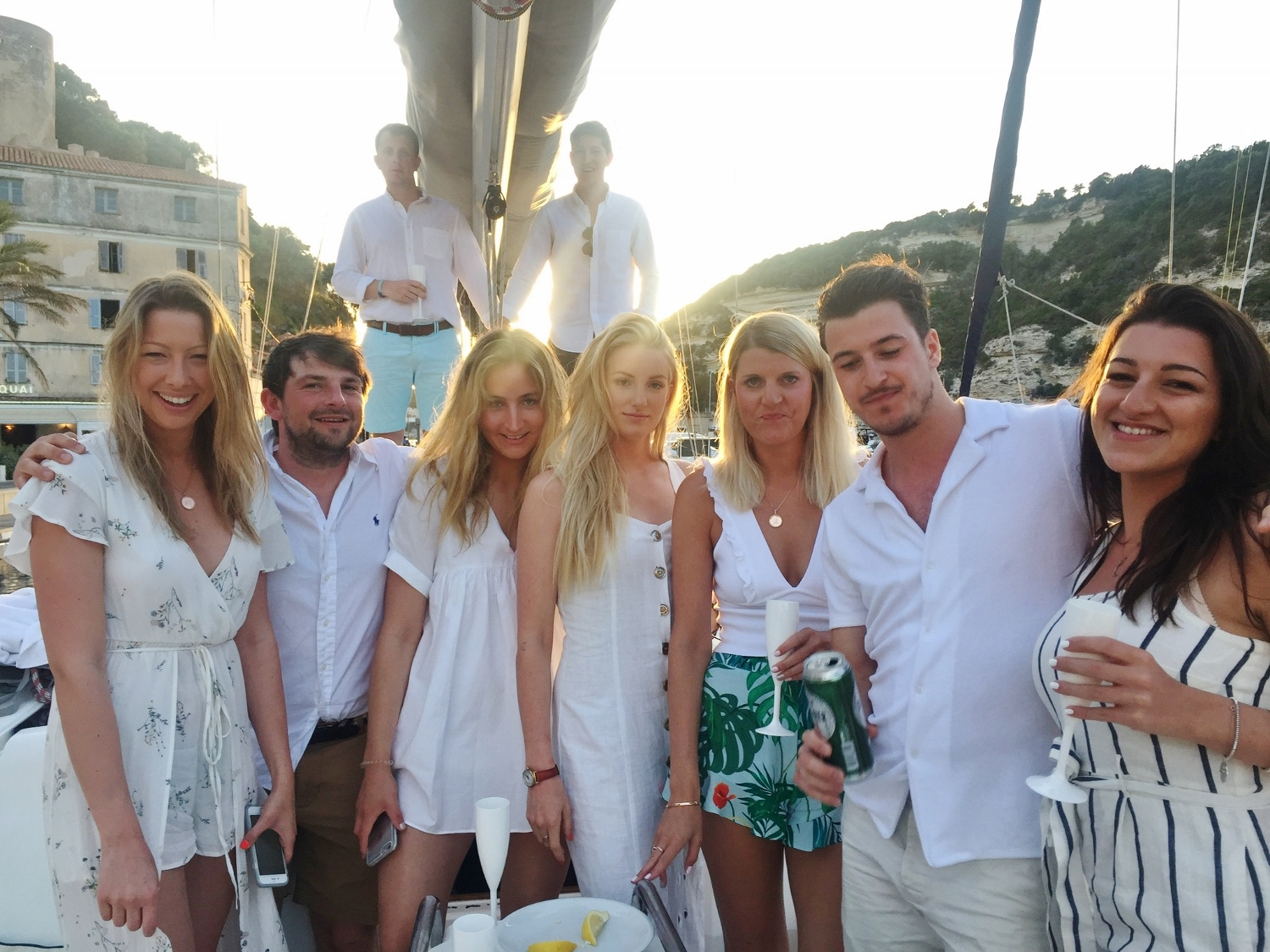 The next day was a suitably slow start. Following a run to Isola Santa Maria we spent a long afternoon on the beach at Spiaggia di Cala Santa Maria. In fact, it was probably a bit too long. The skipper (yes...me) falling asleep on the beach and waking to a “Gosh it’s 6pm we really should be going Sam!” was probably the reason there was no space for us on the quay in Palau – whoops! Thankfully the bay opposite the Marina was well suited to dropping an anchor (a mooring fee free night - hoorah!). As it was all my fault that the girls didn't have access to real showers (a mistake I won’t make again...) we shuttled into the town for an evening meal at Hostaria Cuppulata.

We had breakfast at anchor in the bay near Punta Coda. This was followed by a quick sail up to the best bay in the area. The jewel of the emerald coast - Cala Coticcio (also known as Tahiti Beach). On arrival a group of catamarans had blocked off the entrance to the bay. But some nifty manoeuvring allowed us to sneak through (hoorah for mono-hulls)! We got the spot closest to the beach – real modern day pirates - stealing the Instagram snap shot rather than the gold bullion! Again, pushing the day to its limits, we motored round to La Maddalena Town, where we had two of the 4 marinas haggling over the radio to get us to go in. The winner didn’t pick up the VHF but jumped in a RIB and gave us the best price! The town is brilliant. Our restaurant choice was not... give Ristorante L’aragosta a wide berth - however busy it looks! 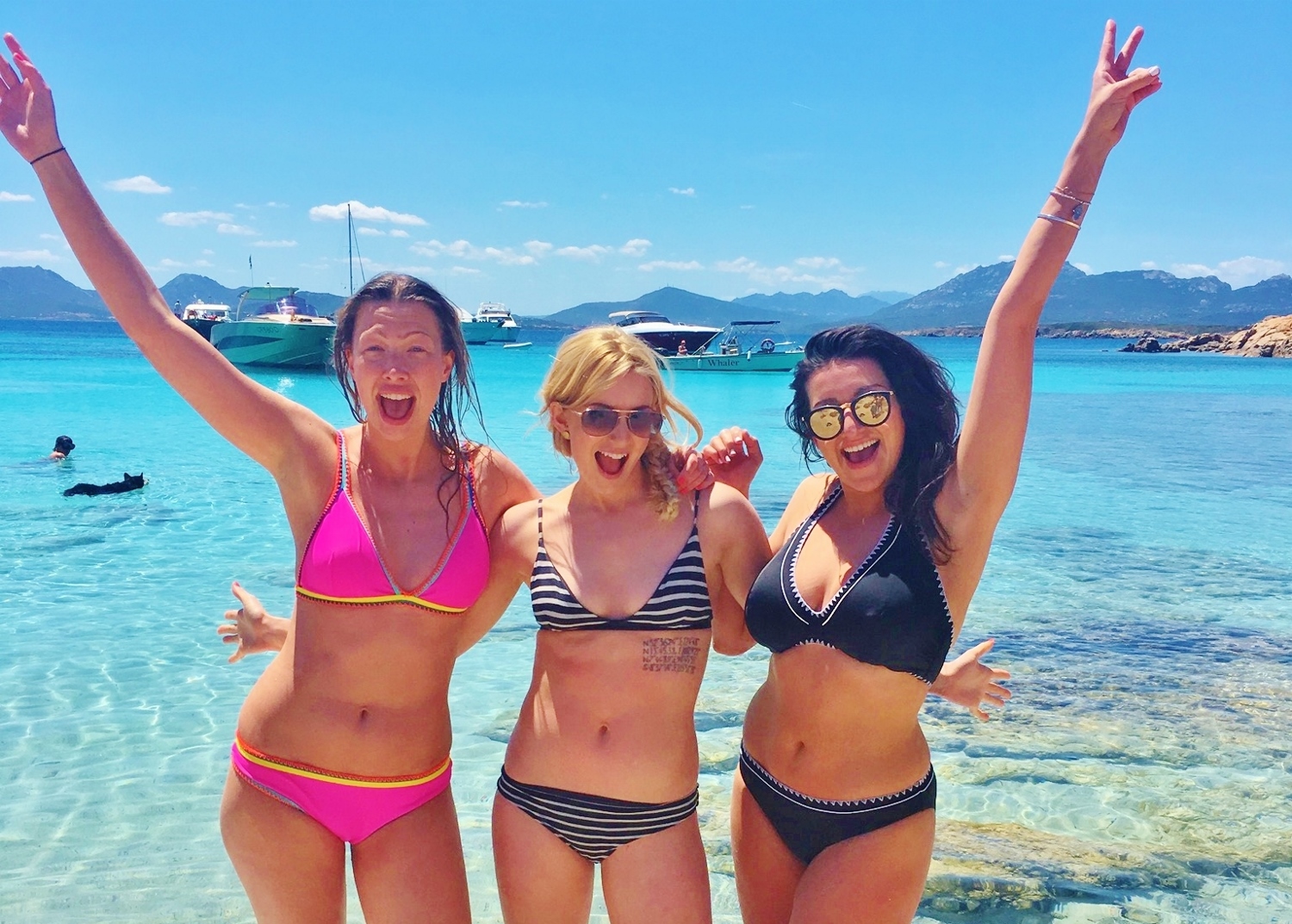 Another late morning and a sail to Porto Cervo was our stop for the last day. Our reasons two-fold; firstly, the charter company advised filling up here rather than waiting for the tricky fuel station in Portisco and secondly (being the celebrities that we had recently become); we had to get photos of us in the super yacht capital of the region. Our 50ft boat was made to look like a small rubber dinghy in comparison to the amazing superyachts that flood the Marina. Despite the chart and our pilot book saying it was ok... you are now not allowed to drop an anchor in the bay (as we found out the awkward way on our way back from lunch which, in itself, was an experience). At €19 for a bottle of beer and €50 for a Club Sandwich, it is the place for a different crowd to our crew! 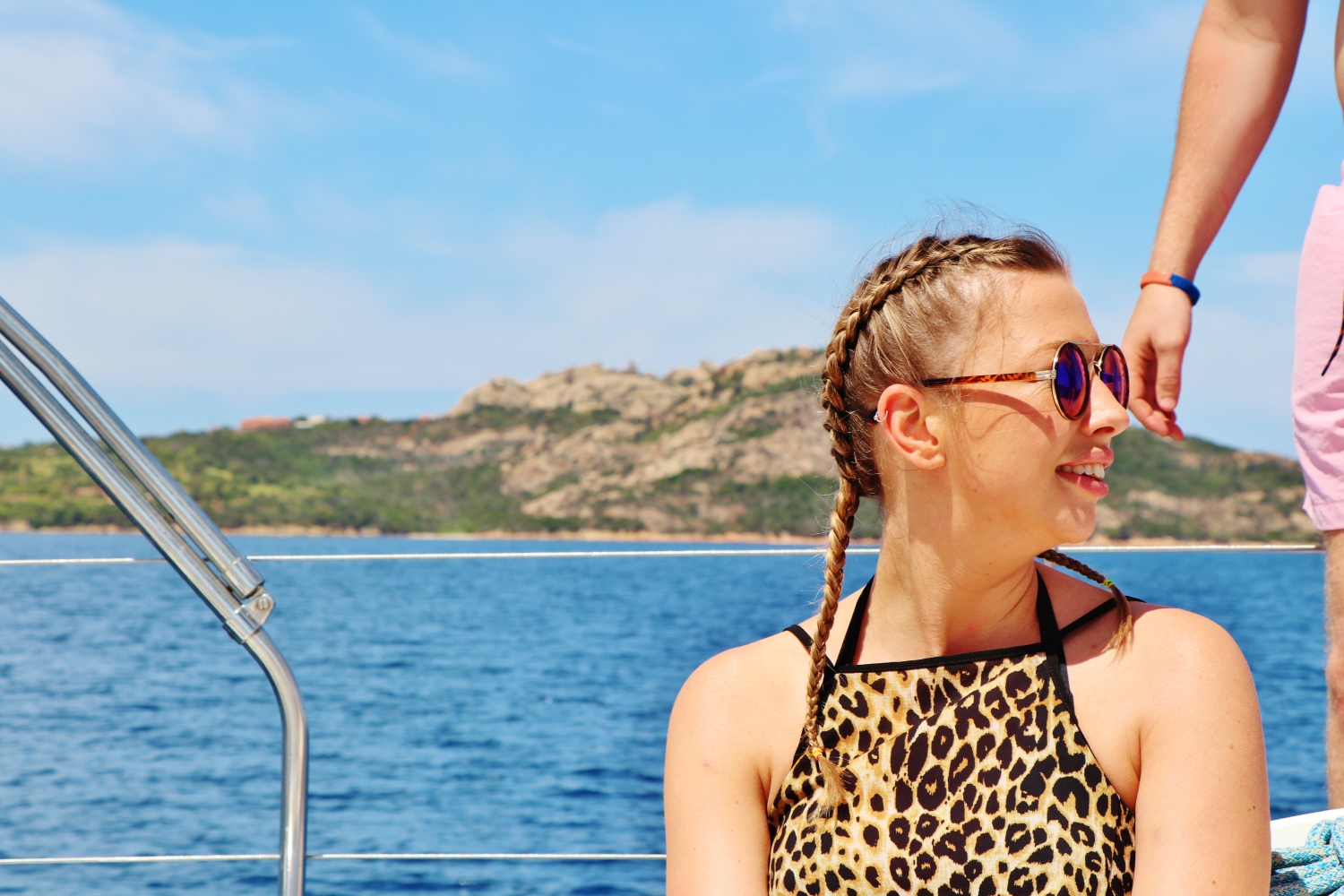 A summary of the week at Matt’s Pizzeria

Following an easy check-out process, we had booked one of the big square tables next to the water at Matts pizzeria – a great evening recounting the week’s events and even a Sailing Holidays Flotilla style awards ceremony wrapped up a wonderful week. I have always said these islands are a well-kept secret. The water is as blue as the photos suggest, the food is spectacular and the towns ooze character and style. It may be a bit more expensive than sailing in other areas but I would pay the premium every time. It is hands down the best sailing area I have ever explored. 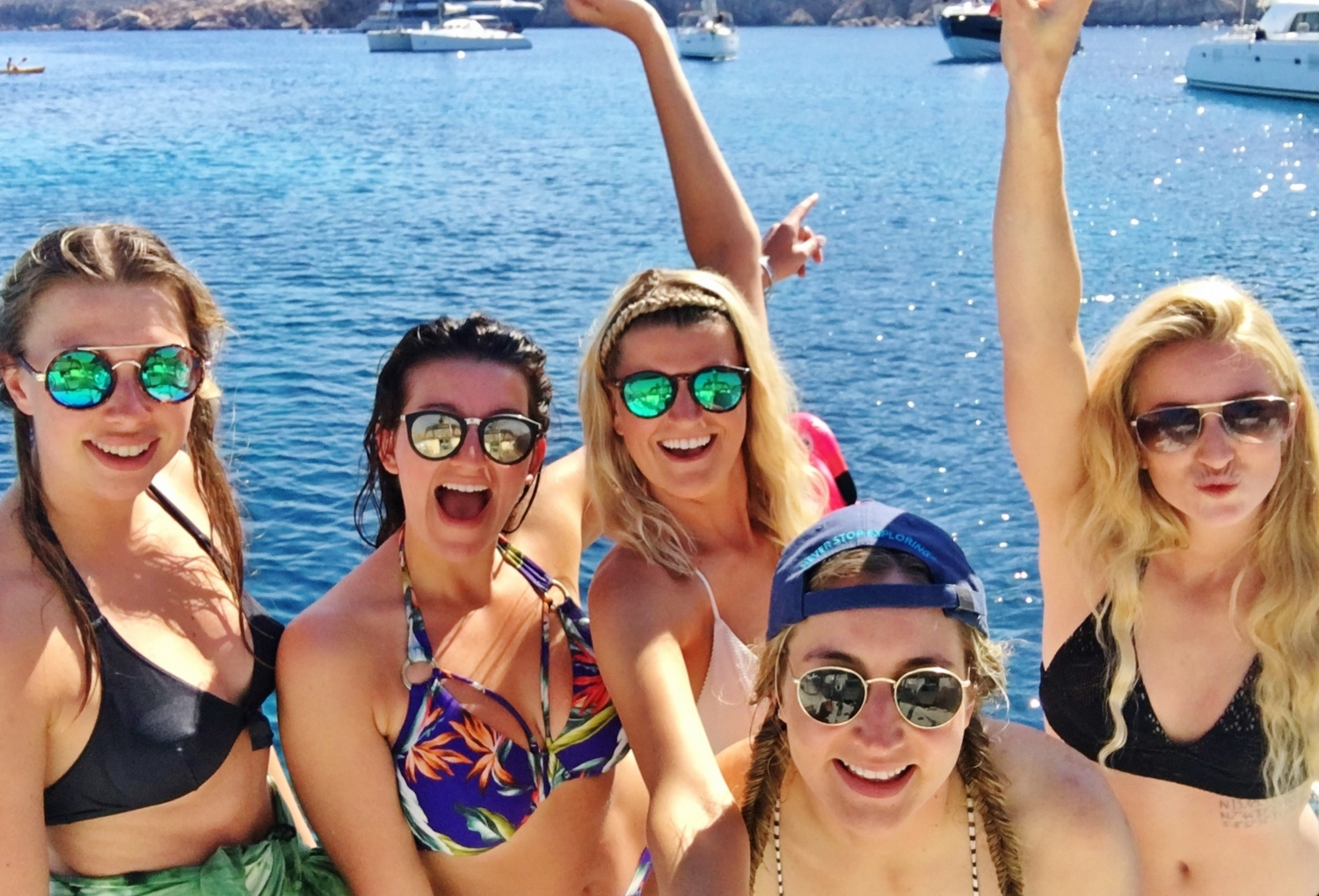