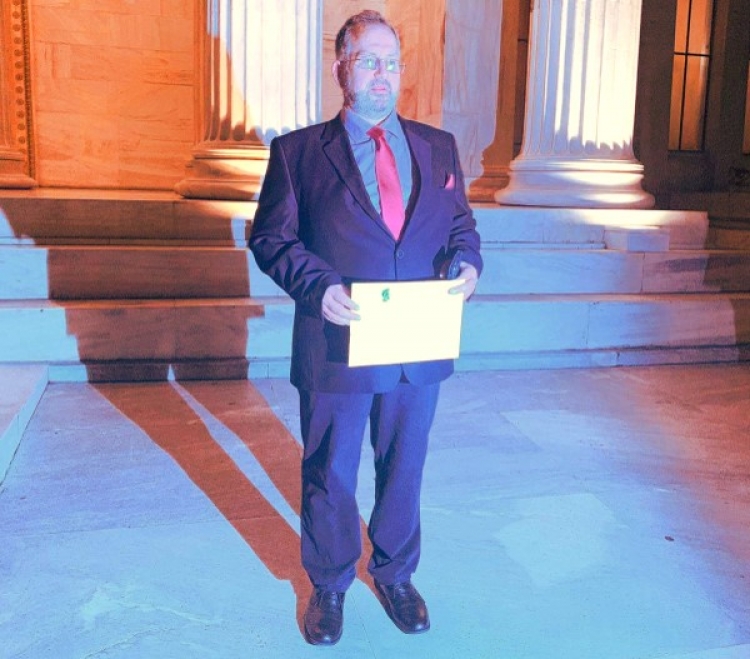 Our friend Kostas from Alonissos (Sporades Islands) has recently received the Athens Academy Award! This is a prestigious prize that the Academy presents annually to people who stand out in Science, Humanities and Fine Arts.

Kostas was awarded this for his priceless contribution to the preservation of cultural heritage of the Northern Sporades Islands through his collection of maritime antiquities, the publishing of his books and the foundation of the Museum in Patitiri.

Kostas has always welcomed our lead crews and flotilla sailors with open arms in Steni Vala each summer.  He is the Mayor of Alonissos and runs the fascinating Museum, which is definitely worth visiting.

You may have met him in Ikaros Café if you have sailed on our Sporades Flotilla, he works in both the café and the supermarket. He has a wealth of knowledge about the area and his books contain amazing facts and historical information about the Sporades Islands.

Kostas has written some amazing books on the history of Alonissos and it surrounding islands. His latest effort is called “The Escape” which is centred on New Zealand, Australian and British troops who were sent to Eastern Greece, with their 303 rifles, to defend it against Hitler’s Panzers. Seemed like a good idea at the time! The Greek people suffered enormously.

Congratulations on your success Kostas, we look forward to seeing you again soon to celebrate properly (with a few cold ones), Yamas!