Barrie's summary of the first Faraways flotilla of the summer... 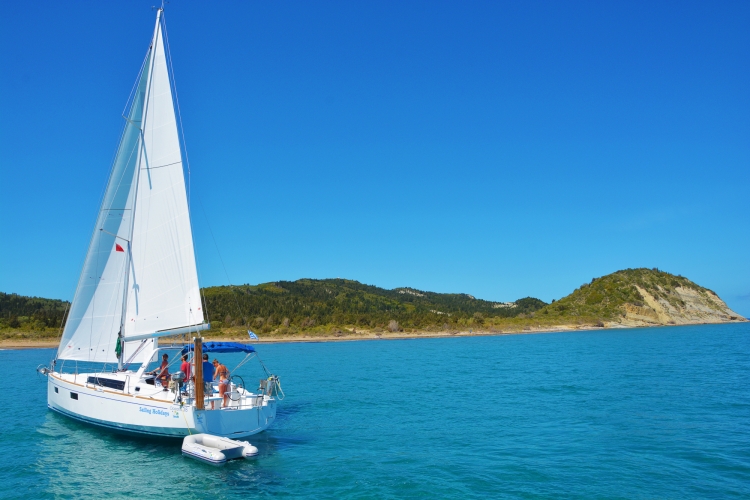 We went out on 28th April for two weeks and had fabulous weather which allowed us a very pleasant first night out in St Stephanos to acclimatise everyone. We settled for dinner shore with the rest of the flotilla and enjoyed the hospitality of Kostas Taverna.

The flotilla then headed directly out to the nice new harbour on Ericousa, a beautiful and sparsely populated Island. The harbour is pristine with plenty of space for our flotilla. Some of the team took a walk up to the heli-pad to watch the sunset before heading back to the boat for some dinner on board.

We had two nights there, allowing us to explore the island on foot. Not much was open, but we still managed to eat in a local taverna, and savour the spring flowers!

The following day, we popped across the eight miles or so to Othoni, another incredibly picturesque Island with two harbours.

The Island of Mathraki wasn't open yet, but we decided to moor up here for a recce and some lunch. We then headed down to Port Timoni (on the north west coast of Corfu), where our crew built a raft. Some people ate on board, and others walked to a taverna high up on the hill. A glorious spot.

A strong North West wind was forecast for the next day, so we skipped Palaiokastritsa and had a glorious run under sail all the way down the west coast of Corfu to Lakka on Paxos Island.

The Faraway Islands flotilla is goverened by the direction of the wind and the area is really popular with keen sailors. Our flotilla will usually stay a couple of days around Paxos, and then wend its way in a zigzag back up to Corfu Town then Gouvia marina with overnight stops in Mourtos, Plataria, Petreti and Sayiadha.

Here is our short taster video on the first Faraways Flotilla of the year...