Flotilla: A journey to Ithaca - by Rosie Wennik 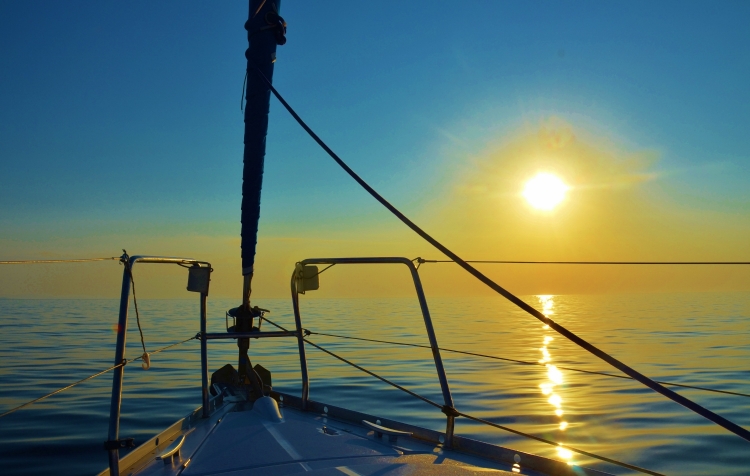 This lovely piece was written by Rosie who sailed the Whole Ionian...

"I am writing to leave some feedback on my holiday with you this year, sailing the whole Ionian with Lead Boat Kefalos (Charlie, Jonathan and Clodagh)... I could not have had a better time with you... I am an aspiring travel writer, and enjoy writing about trips or parts of trips I take. After returning from sailing in Greece I wrote a piece about Ithaca, which is an island I have loved since I first travelled there a number of years ago. I thought I would attach it to this email: I wrote it about my experience following this holiday, and I hope it conveys another kind of 'feedback'! I thought it might be nice to send to you as fellow enthusiasts on the Ionian Islands! :)"

The morning of Wednesday 8th July...

The morning of Wednesday the 8th of July. We wake up early but the blanket of heat is already folding down over the bay of Ay Euphemia, on the Eastern side of Kefalonia. A few people are stirring, languishing along the line of cockpits before the babble of the day sets in, but for the most part the quay is quiet. We want to get up to Fiskardo, the picture-postcard fishing village at the top of the island, by lunchtime: such is her popularity that arriving later than that usually means the spots on the quay have long gone. At this time of the morning there’s scarcely any wind, and the tall ivory jib sail flaps around lazily. We decide to eat breakfast as we float just inside the bay: the early start meant that there was no time for grocery shopping so I tuck into yesterday’s baklava as we huddle under the shade to avoid the sun’s already-scorching rays.

About half way between Ay Euphemia and Fiskardo, as we sail up the channel between Ithaca and Kefalonia, the wind picks up. It’s still only gentle, a lilting, glorified breeze, but it’s good enough to turn off the churning motor and enjoy the stillness of the morning. I’m stealing a moment of reflection on the foredeck and I turn around to survey the landscape behind us, and there it is: the snapshot. The incredible, unanticipated burst of beauty which imprints in my memory the second I see it.

We are surrounded by a haze of powdered blue

We are surrounded by a haze of powdered blue. The light everywhere is soft, dispersed and diluted by a barely-there cloud of translucent mist which lingers on top of the water and melts into the sky. The rising sun behind us dances on the water’s surface and turns it into a rippling sheet of diamonds. The outline of a solitary boat can be seen, as if sketched with Japanese ink onto a wash of watercolour. Behind it, sketched fainter still but unmistakable, forming angular summits in the blue haze, there she stands. Ithaca. Today I’m saying my goodbyes to the island as we drift through the channel: tomorrow we sail from Fiskardo straight up to Lefkada, leaving Ithaca behind.

We had sailed into Frikes, the tiny harbour town perched on the top of the island, a few days before. The wind had been strong all day, our white sails full and Tucana keeling steeply all the way. Spray often flew across the boat along with the wind... a welcome relief from the inescapable heat of a sheltered harbour. I grinned like a maniac every time it caught me, slapping me across the face with cold, salty water. Once we finally got in, it took us a long time to moor up, rafted along two other boats, since the harbour, just like the town, although popular, is tiny.

Out on deck, it was blisteringly hot. The wooden panels in the cockpit had been absorbing heat all day, and stepping on them was hell. I jumped around the boat avoiding them, sticking to the comparatively cool white plastic to ease my sore soles before heading into town to hunt down a shower with two pieces of information: they were the ‘best in the Ionian’ (land showers are something people living for extended periods on boats get very excited about), and that I’d find them in the minimarket. The boys behind the counter were darkly tanned with wide smiles. They slouched on wooden chairs around the entrance, in blue jeans and white t-shirts: miniature Mediterranean James Deans. They flirted heartily and two of them scrambled to be the one to show me to the showers. The tussle obviously provided no winner: I was eventually escorted by both. 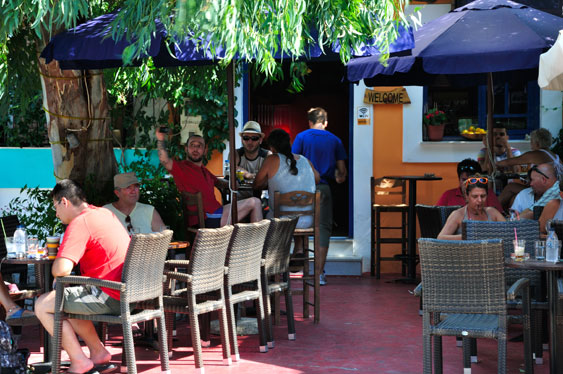 Evening in Frikes fell soft and warm. Breezes drifted through the harbour. Hushed chatter travelled from the restaurants on the quayside across the water to the boat. It was gloriously balmy and romantic, and caught up in the whole thing I put on a silk dress. I soon discovered that this had been a mistake: light gusts swept quickly up my skirt and swirled off, taking my modesty along with them. I reluctantly changed back into shorts. We drank Campari cocktails and ate feta cheese fried in sweet sauce and rolled in sesame seeds. Two little girls in blue and white dresses played on the wooden pontoon next to the taverna and skinny cats weaved between the tables fishing for scraps.

Like its showers, the nightlife in Frikes stands out in the Ionian, all down to one thumping, happy bar called Fiorendino. On nights when a flotilla’s in it’s packed to the rafters with sweaty revellers. ‘You will never drink alone’ is their motto, and it’s certainly true here. The DJ staunchly punches out 80s classics well into the early hours, lighting up the otherwise sleepy town. Perched on a high overhang on the other side of the harbour, looking out into the night over the inky sea, you can still hear the party... ‘ba de ya, dancing in September, ba de ya...’.

The sea stretched away, glittering, an indescribably deep infinite blue 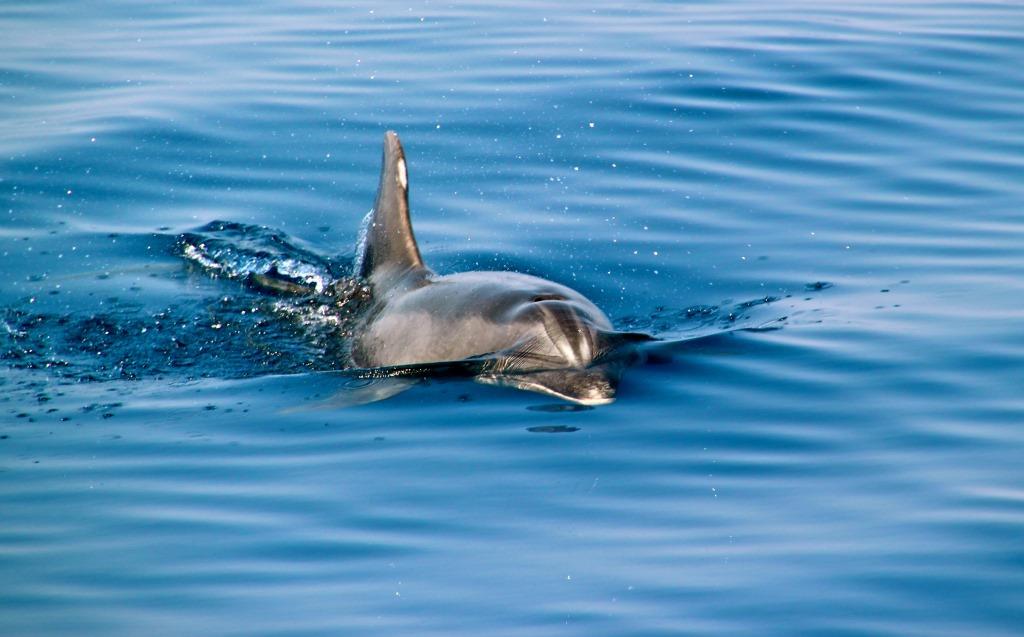 The next morning (with a throbbing head) I walked up to that same overhang. The steep road cut a scar up into the hills, and crunched under my feet. Ithaca rock is a creamy alabaster, and cliffs with sheer edges rise to rugged peaks. The soil is a rich crimson. It smells sweet, fermented. The land fell steeply away from where I knelt. It was thickly covered in gorse and lush green cypress bushes and trees, crowned with wild tufts of vibrant pink bougainvillea. The sea stretched away, glittering, an indescribably deep infinite blue. The combined brilliance of the colours left me standing there gawping until the relentlessly searing sun forced me back the way I had come and into the shade cast mercifully by the town.

A pair of sleepy dolphins, meandering around in long slow arcs...

Leaving Frikes later that morning we found ourselves with company. The close air left the water untouched, its surface like a sheet of glass, broken only by a pair of sleepy dolphins, meandering around in long slow arcs and sending ripples drifting through the stillness. The further you sail away from Ithaca, the more timeless she becomes. Once you’re out of earshot of the buzzing motorbikes which zip down from the hills and through town, you could just as well be gazing at the mythical home of Odysseus in its own time. Looking at her from out at sea, two and a half thousand years of human history seem to melt away and there she stands as she always has done: bright Ithaca... ancient, transcendent.